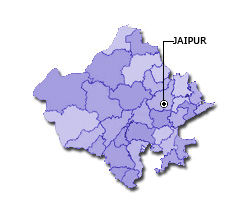 Rajasthan, area-wise the largest State in India area-wise prior to Independence was known as Rajputana. The Rajputs, a martial community ruled over this area for centuries.

The history of Rajasthan dates back to the pre-historic times. Around 3,000 and 1,000 BC, it had a culture akin to that of the Indus Valley civilisation. The Chauhans who dominated Rajput affairs from seventh century and by 12th century they had become an imperial power. After the Chauhans, the Guhilots of Mewar controlled the destiny of the warring tribes. Besides Mewar, the other historically prominent states were Marwar, Jaipur, Bundi, Kota, Bharatpur and Alwar. Other States were only offshoots of these. All these States accepted the British Treaty of Subordinate Alliance in 1818 protecting the interest of the princes. This naturally left the people discontented.

After the revolt of 1857, the people united themselves under the leadership of Mahatma Gandhi to contribute to the freedom movement. With the introduction of provincial autonomy in 1935 in British India, an agitation for civil liberties and political rights became stronger in Rajasthan. The process of uniting scattered States commenced from 1948 to 1956 when the States Reorganisation Act was promulgated. First came Matsya Union (1948) consisting of a fraction of states, then, slowly and gradually other states merged with this Union. By 1949, Major States like Bikaner, Jaipur, Jodhpur and Jaisalmer joined this Union making it the United State of Greater Rajasthan. Ultimately in 1958, the present State of Rajasthan formally came into being, with Ajmer state, the Abu Road Taluka and Sunel Tappa joining it.

The entire western flank of the State borders with Pakistan, while Punjab, Haryana, Uttar Pradesh and Madhya Pradesh bound Rajasthan in north-east, south-east and Gujarat in south-west.

Total cultivable area in the State is 219.46 lakh hectares. and estimated food grain production was 123.59 lakh tones in the year 2009-10. Estimated total cultivated area in the State was 245.38 lakh hectare and estimated food grain production was 201.45 lakh tonnes in the year 2010-11. Principal crops cultivated in the State are rice, barley, jowar, millet, maize, gram, wheat, oilseeds, pulses and cotton. Cultivation of vegetables and citrus fruits such as orange and Malta has also picked up over last few years. Red chillies, mustard, cumin seeds, Methi and Hing are commercial crops of the State.

Rajasthan has rich deposits of zinc concentrates, emerald, granite, gypsum, silver ore, asbestos, feldspar and mica. The State also abounds in Export Promotion Industrial Park of country has been established and made operational at Sitapura (Jaipur), Boranda (Jodhpur) and Bhiwandi (Alwar). Inland Container Depots have established in Jaipur, Bhilwara, Jodhpur, and Bhiwandi (Alwar) to promote the exporters. Special Economic Zone for Gems and Jewellery at Sitapur (Jaipur) and for Handicrafts at Boranada (Jodhpur) have been established, and multipurpose special Economic Zone "Mahendra World City" has been established in PPP model at Jaipur.

The installed power capacity in the State has become 9188.22MW up to March, 2011 of which 4097.35 MW is produced from the State owned projects, 972.92MW from collaboration projects, 2240.23 MW from the allocation from Central power generating stations, 1607.70 MW from Wind, Solar and Biomas Projects and 270 MW from Private Sector Projects.

Railways: Jodhpur, Jaipur, Bikaner, Kota, Sawai Madhopur and Bharatpur and Udaipur are main Railway junctions of State. Total length of Railway line is 5683.01 Km. in the State as on March, 2008. 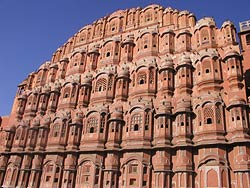 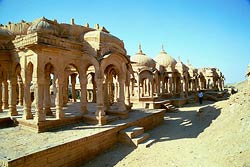 The medieval fortress town of Jaisalmer rises out of the remote deserts of Rajasthan, like a city at the very end of the world. According to mythology, after the epic battle of the Mahabharata, Lord Krishna and the Pandav hero, Bheem, came here for a ceremony.

India is one of the oldest civilizations in the world with a kaleidoscopic variety and rich cultural heritage. It has achieved all-round socio-economic progress since Independence. As the 7th largest country in the world, India stands apart from the rest of Asia, marked off as it is by mountains and the sea, which give the country a distinct geographical entity. Bounded by the Great Himalayas in the north, it stretches southwards and at the Tropic of Cancer, tapers off into the Indian Ocean between the Bay of Bengal on the east and the Arabian Sea on the west.